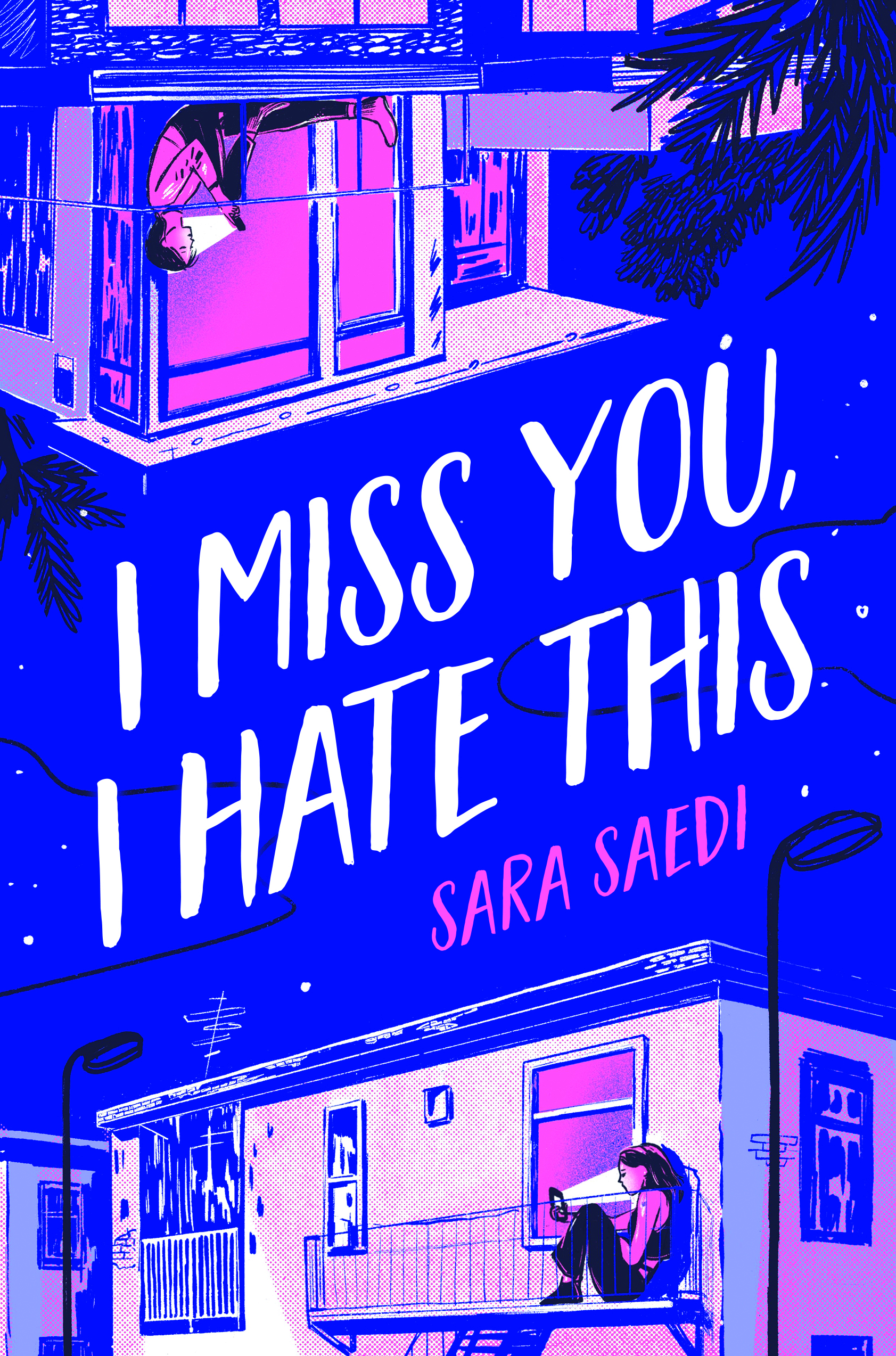 I Miss You, I Hate This

I Miss You, I Hate This will be published on October 11, 2022 by Little Brown/Poppy. It tells the story of two best friends who are separated due to a pandemic that disproportionately impacts young people. 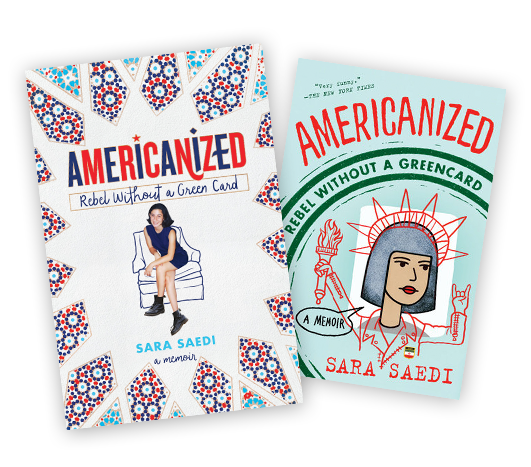 The hilarious, poignant, and true story of one teens’s experience growing up in America as an undocumented immigrant from the Middle East, perfect for fans of Mindy Kaling and Lena Dunham’s books.

At thirteen, bright-eyed, straight-A student Sara Saedi uncovered a terrible family secret: she was breaking the law simply by living in the United States. Only two years old when her parents fled Iran, she didn’t learn of her undocumented status until her older sister wanted to apply for an after-school job, but couldn’t because she didn’t have a Social Security number.

Fear of deportation kept Sara up at night, but it didn’t keep her from being a teenager. She desperately wanted a green card, along with clear skin, her own car, and a boyfriend.

Americanized follows Sara’s progress toward getting her green card, but that’s only a portion of her experiences as an Iranian-“American” teenager. From discovering that her parents secretly divorced to facilitate her mother’s green card application to learning how to tame her unibrow, Sara pivots gracefully from the terrifying prospect that she might be kicked out of the country at any time to the almost-as-terrifying possibility that she might be the only one of her friends without a date to the prom. This moving, often hilarious story is for anyone who has ever shared either fear.

“Sassy, smart, informative, endearing, Sara Saedi’s memoir reveals the very human face behind the labels and stereotypes. This is a memoir that will win your heart and make you see immigration as truly the best way to make America great.”

-JULIA ALVAREZ, award-winning author of How the García Girls Lost Their Accents, Return to Sender, and Before We Were Free

“With gumption, Saedi draws from her American-ness and Iranian-ness for a successful depiction of immigrant life in the U.S.: a must-read.”

“Sara Saedi has written a memoir about being Iranian and being American, but most importantly, about being human. She describes her experiences with such bold specificity that they become instantly universal, and in the process gives poignant and hilarious voice to the immigrant experience.”

-ABDI NAZEMIAN, award-winning author of The Authentics and The Walk-In Closet

“The descriptions of her family are vibrant and hilarious, and her approach to her Iranian heritage blends deep affection and familial exasperation.”

“This irresistible and timely memoir is hard to put down.”

“Riveting, urgent, and laugh-out-loud funny, Americanized is an effervescent and thrilling memoir about the travails of adolescence, the pain of keeping a secret, and the quest to find belonging. Sara Saedi is Judy Blume for a new generation.”

-ADITI KHORANA, author of The Library of Fates and Mirror in the Sky

“This is a book for anyone who’s had acne. If you’ve never had acne, you probably can’t read. You’ve never needed to.”

-ROB THOMAS, creator of Veronica Mars and co-creator of iZombie

“This book will keep readers fully entertained while pushing them to deeper cultural understandings. VERDICT A must-purchase for memoir collection.” 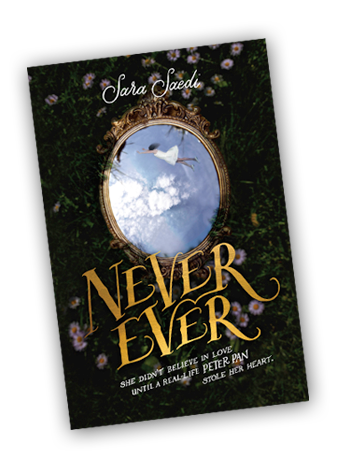 Wylie Dalton didn’t believe in fairy tales. Then she met a real-life Peter Pan. When Wylie encounters Phinn – confident, mature, and devastatingly handsome – at a party the night before her brother goes to juvie, she can’t believe how fast she falls for him. And that’s before he shows her how to fly.

Soon Wylie and her brothers find themselves whisked away to a mysterious tropical island off the coast of New York City where nobody ages beyond seventeen and life is a constant party. Wylie’s in heaven: now her brother won’t go to jail and she can escape her over-scheduled life with all its woes and responsibilities – permanently.

But the deeper Wylie falls for Phinn, the more she begins to discover that something is being kept from her and her brothers. Someone on the island has been lying to her, but the truth can’t stay hidden forever.

Love NEVER EVER? Take a trip to Minor Island for island recipes, playlists and more.

“An edgy thrill ride to an island where no one over age 17 resides or survives… a cleverly repackaged Peter Pan for teens, with characters and subplots that beg for a sequel.”

“A shocking twist awaits, the reader, giving this just enough to separate it from other Peter Pan offshoots.”

“Saedi, in her debut novel, creates an original, fantastical world for her lost children… Fans of Danielle Paige’s Dorothy Must Die series will love this dark version of another childhood tale. A cliff-hanger ending promises more strange adventures ahead.” 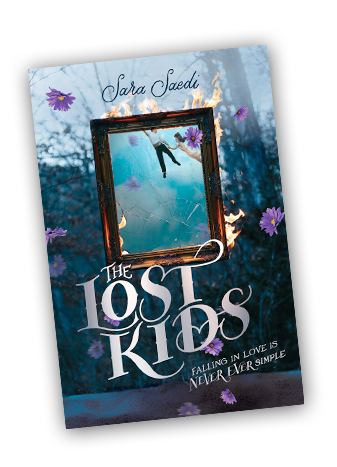 Just a few weeks ago, Wylie Dalton was living on magical Minor Island where nobody ages past seventeen, and in love with Phinn, the island’s leader. Now, her home is a creaky old boat where she’s joined a ragtag group of cast-offs from the island, all dead-set on getting revenge on Phinn for betraying them. But when the Lost Kids invade their former paradise, they’re stunned to find that their once-secret island is no longer so secret, and that a much bigger enemy is gunning for Phinn . . . and all the Minor Island kids. Told from both Wylie’s and Phinn’s perspectives, this dramatic sequel reveals that when you Never Ever grow up, the past has a way of catching up to you.

© 2023 Sara Saedi. Website by Midnight Grim and For the Curious Ones